To-Go and A Show: Bellwether and Beetlejuice

To-Go and A Show: Bellwether and Beetlejuice 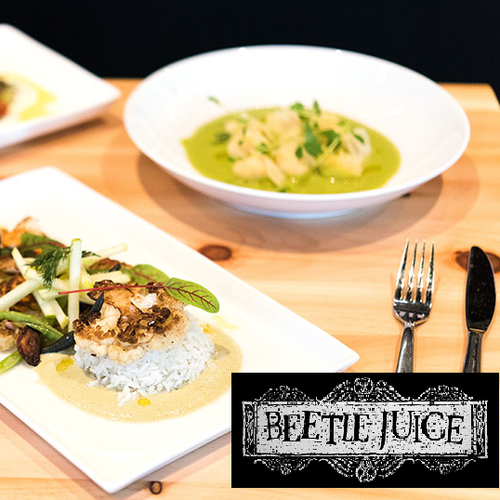 Have you missed Jacksonville Magazine's Secret Supper Clubs? Well, we've missed hosting them. With a little work here and a lot of brainstorming there we have a new concept for our guests to enjoy local favorites while remaining safe in their own homes.

To-Go and A Show!

We partner with local restaurants to bring you a delicious meal (yes, you guessed it, it's a secret!) that you can enjoy in your own home. The twist? It's themed to a popular film! It's simple. Simply order your meal (buy a ticket above), pick up the mystery dinner on the designated date and time frame and head home and watch your film.

Our next stop in the series is with Chef Kerri Rodgers of Bellwether who has themed their dinner around Beetlejuice. Guests can expect four courses featuring tasty bites of noodles, shellfish, beef... but we can't give too much away! Pick up is Friday, October 16, between 5-6:30 PM.

Beetlejuice is a 1988 American fantasy comedy film directed by Tim Burton. The plot revolves around a recently deceased couple who become ghosts haunting their former home, and an obnoxious, devious poltergeist named Betelgeuse (pronounced and occasionally spelled Beetlejuice in the movie and portrayed by Michael Keaton) from the Netherworld who tries to scare away the new inhabitants. The film was a critical and commercial success, grossing $73.7 million from a budget of $15 million. It won the Academy Award for Best Makeup and three Saturn Awards: Best Horror Film, Best Makeup, and Best Supporting Actress for Sylvia Sidney. The film's success spawned an animated television series, video games, and a 2018 stage musical.

You can currently watch the film on YouTube, Google Play Movies & TV, Amazon Prime Video and Vudu starting at $3.99.

But it doesn't stop there. Make sure to post a photo of your to-go and a show set up on social media. Share your fun night in using the #ToGoandAShowJax on Facebook or Instagram and one lucky winner will receive a prize.