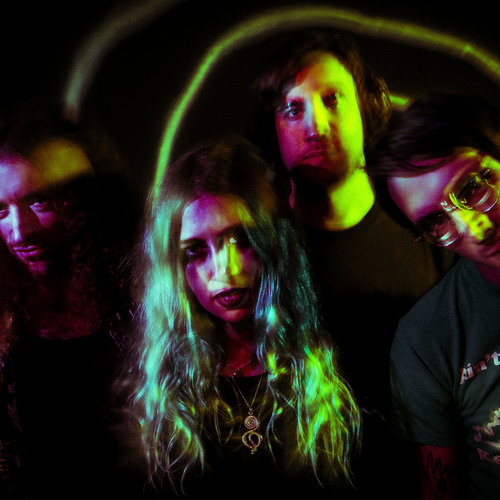 A tremendous triple bill of Frankie & the Witch Fingers, Acid Dad and Kairos Creature Club is landing at Intuition!

Frankie & the Witch Fingers are known for their explosive performances. With their rowdy and visceral approach to live shows, each member brings their own devilry to induce an experience of bacchanal proportions. Using absurd lyrical imagery—soaked in hallucination, paranoia, and lust—the band’s M.O. strikes into dark yet playful territory. This sense of radical duality is astir at every turn, in every time signature change. Airy vocal harmonies over heavily-serrated riffs. Low-key shamanic roots under vivid high-strangeness. Rambling stretches and punctuated licks. Cutting heads and kissing lips. All this revealing a stereophonic schizophrenia that has flowed throughout their body of work: an ebb & flow of flowery- poppy horror. The band’s latest incarnation is primed to break new sonic ground, edging into the funky and preternatural. Just when you think the trip couldn’t get any weirder, Frankie and the Witch Fingers cranks up the dial, shatters the mundane, and summons new visions.

Details are sparse, but here’s what we know about Kairos Creature Club: The project--which is referred to by members as a multilevel interrogative self-enlightenment organization--was founded by Kairos (Lena Simon/La Luz), Billy Creature (Glenn Michael Van Dyke/BOYTOY), Daddy Braids (Matt Shaw/The Mother Gooses) and Lee Savage (James Scott Rubia/Animal Clinic). The group and associated movement have been variously defined as a cult, a business, and a new band. The project seems to include global collaboration and has attracted international celebrities like Sarah Palin (One Sentence Supervisor) and Lucas Harwood (King Gizzard and the Lizard Wizard).