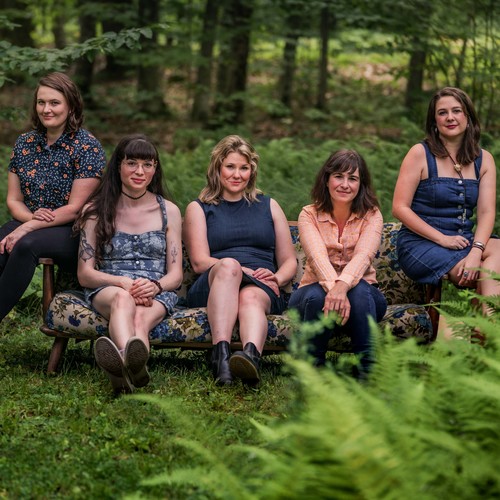 Hailing from across North America, and reared in diverse musical styles, Della Mae is one of the most charismatic and engaging roots bands touring today. They have traveled to over 30 countries spreading peace and understanding through music. Their mission as a band is to showcase top female musicians, and to improve opportunities for women and girls through advocacy, mentorship, programming, and performance.

Following up 2020’s Headlight, their new album Family Reunion features new members Maddie Witler and Vickie Vaughn and captures the joy of the band reuniting after more than a year of virtual collaboration, Zooms and group texts. The band is also joyful to be returning to touring.

Emerging from 2020 with songs, vaccinations and an immense gratitude, Della Mae converged at Tonal Park Studio in Maryland in May of 2021. The band that had been talking, texting, Zooming, teaching, writing, and playing was finally able to get back together — and they wanted to record the immediate moments that transpired. It's a snapshot of that reunion — playing music together for the first time in a year and a half, and setting up microphones to capture it.

Della Mae’s Family Reunion celebrates surviving a tough time by deepening the bond with a community of fans who have become like family. These dedicated friends ultimately inspired and funded the new project.

The album showcases the band’s dyed-in-the-wool bluegrass chops while stretching out lyrically and texturally. Ride Away, a favorite from live shows and loosely based on the classic Vincent Black Lightning, finds the band in their bluegrass wheelhouse. Particularly prescient, The Way It Was Before (written with Mark Erelli) pairs a distinct old-timey sound with a contemporary call to action by highlighting stories encountered this year of the working poor, victims of gun violence and racial injustice. It challenges the listener to resist the pull of the "good old days" and of returning to the way things were before. These Songs and Heart of My Home touch on the range of emotions that a year off the road evoked.

Mixed in with the 6 new originals, Della Mae nods to their heroes and influences with new covers of songs by bluegrass greats John Hartford (You Don’t Have To Do That) and Hazel Dickens (A Few Old Memories), and songwriters Gillian Welch and David Rawlings (Dry Town).

During the pandemic, hearing terms like “coping” and “pivot” became a cultural norm. In music, venues fell silent and artists across the world asked themselves what they could do. Della Mae asked what they could do for fans.

While the members of Della Mae live in distant geographies individually, the band continued to stay connected remotely. Beginning as one-off performances in April 2020, band members kicked off what became 15 months of weekly live-streamed performances that brought together their fans for lead singer Celia Woodsmith’s “Pretty Songs for a Sunday” and for founding fiddler Kimber Ludiker and guitarist Avril Smith’s “Monday Night Hoedown.” These weekly shows on Facebook -- and the band’s Patreon fan club which included weekly Zoom cocktail hours that are still going strong -- have allowed band members and listeners to build a new kind of bond and deeper relationship through intimate performances and the shared experience of getting through the seemingly endless months of isolation together.

In May 2021, after all were vaccinated, they converged at Tonal Park Studio in Maryland. The band that had been talking, texting, Zooming, teaching, writing, and playing was finally able to get back together - and they wanted to record the immediate moments that transpired.

We are always evolving, changing, and growing as a band - there is always further to go and more to experiment with musically. To me, this record is about independence, ownership, trust, and family. We relied on our instincts, skills and musicianship. It is also a bit about catharsis - rising from the ashes of a global pandemic with new skills, songs, and outlook on life. - Celia Woodsmith

“Family Reunion” is a collection of recordings that capture the energy, vulnerability, power, and solidarity so many are experiencing in this time of reconvention.

Leading off with “These Songs,” the Dellas express the worry, uncertainty, and reluctant longing for a romantic memory of gritty tour life. Known for their revelatory power and force as a live touring band, it is no wonder that Della Mae is eager to return to the road.

The first single releasing in advance with the album announcement is “Ride Away." Very loosely inspired by Richard Thompson’s song “Vincent Black Lightening,” it is was written by Woodsmith in 2018, and performed on tour and as part of Della Mae’s last festival set prior to the pandemic at WinterWonderGrass Steamboat Springs.

Particularly prescient is "The Way It Was Before,” written by Woodsmith with Mark Erelli, stands as a call to action - to not forget what we’ve learned, to not become complacent, or in a slip-of-the-tongue express a wish to go back to old days. While the melody and arrangement carries a sound that harkens back to earlier days, the lyrics juxtaposed declare a new future, a new chapter, a new world rich and primed for change, and the need for personal responsibility.

The Way It Was Before captures the importance of listening to each other’s stories -- not just for shared experience but also holding space to empathize with other people’s struggles that may be very different from anything we can imagine ourselves. We have to understand each other before we can move toward a world where we truly embrace our common humanity. - Avril Smith

While most tracks on the record are up-tempo and rollicking, as many expect from Della Mae, the album reflects as complex a mixture of emotion present in the human condition as has been unearthed the past year. A new original song “Goodbye My Friend/Waltz for Lois” is a direct and honest anthem for loss, mourning, and memorial.

I wrote the waltz in honor of my grandmother, Lois, after she passed away over a decade ago. This year we collaborated to put words to the melody that explore a different kind of loss. Celia wrote the first verse about losing a friend, not knowing the original inspiration for the melody. There are many songs about romantic heartbreak but we wanted to explore the pain of a relationship ending with a close friend or family member. - Kimber Ludiker

Mixed in with the 6 new originals, Della Mae nods to their heroes and influences with new covers of songs by bluegrass greats John Hartford (“You Don’t Have To Do That)” and Hazel Dickens (“A Few Old Memories”), and songwriters Gillian Welch and David Rawlings (“Dry Town”).

A Few Old Memories is a tribute to the pioneering feminist songwriter and singer, Hazel Dickens who wrote many timeless songs about the lives of working people struggling to make ends meet as well as many beautiful songs about love and loss -- all from a woman’s perspective, something that was in short supply for too long in the bluegrass tradition. - Avril Smith

Remedy Tree is North Florida's modern acoustic original music band. Hailing from St Augustine, the outfit was established in 2015 by Gabriel Acevedo 2018 Florida State Fiddle Champion and Singer Songwriter. Remedy Tree has been developing their sound blending bluegrass, folk and Old time music with new influences to create a truly unique Americana experience. Remedy Tree has shared the stage with major talent such as The Steeldrivers, Town Mountain, Brett Bass + Melted Plectrum, Chris Henry, Kenny and Amanda Smith, The Grascals and more as they continue to make a name for themselves in Florida. With 3 Studio projects under their belt, Remedy Tree is known for keeping their audiences dancing with their high energy shows and inspiring through profound lyric-driven songs. They currently tour Florida from coast to coast often across state lines playing Bluegrass and Folk festivals listening rooms, bars and clubs alike as they prepare to record their second full length album.