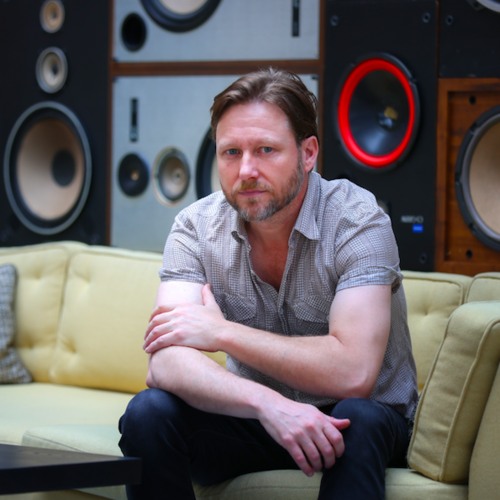 “I pulled these songs from a batch of fifty that mostly predate the pandemic, and all of these felt kin. They’re about doubt, loss, depression, general stir-craziness.

“But I knew I didn’t want to make a record that pondered itself, I wanted it to have motion, so I gave this record an overarching rule: The sadder the song, the more it had to move and groove. That’s how the country weeper ‘That Look I Lost’ got the Motown treatment. I wanted you to nod along, then after listening ask, Wait, what am I shaking my ass to?”

When I Go I Ghost is Cory Branan’s sixth full length release. His first was 20 years ago: He ain’t banging out pulp here. A writer’s writer, Cory’s lines grip like a page-turner, giddy with interior rhyming and wordplay:

I took a shower but the shower didn’t take

the kinda wreck I recognize

That ‘before and after’ look in your eye

When she’s staring down the bad end of the barrel

Of yet another long and loaded night

One propulsive song that jangles with hope is “Come On If You Wanna Come,” with lyrics about being too depressed – maybe too hungover – to venture out, accompanied by music that catches the buoyancy one feels after recovering. “’Come On’ is about as optimistic as I can get. We did all the fun Simmons 1980’s drum samples on there, and added concert toms, putting reverse gated reverb on the drums – an old ‘80s Cars-era trick. There’s Rickenbacker and a 12 string guitar. It’s a respite in the record. It evokes the Traveling Wilbury’s, though maybe a meth-y Wilburys.”

Cory’s stories don’t resolve neatly. “I embrace my fluctuating doubt. The way I write, I feel my way through these dark halls and then realize, Oh, this is how the house is shaped.”

Like a novelist, he inhabits the minds and hearts of his creations, much as they inhabit him. “I’m interested in characters at a crossroads, getting in the flux and staying there. In ‘Of Two Minds,’ I got this feel for the lead character and I asked myself, Who else is in the room with her? Then I realized – she’s the other character too! And by the end, I found myself so wholly identifying that I realized she’s also me.” First she says, “I’m gonna quit while I’m behind,” but in a later verse it’s: “I double down when I’m behind.” Flux indeed, just like real life. That song also features this stinger: “Set the pistol on the dresser and the bed on fire.”

On “Pocket of God,” he’s created a noir movie. “I tried to get as much of a story as I could in there, with someone in the hot seat. You don’t know who he’s singing to until the end, and it’s a s story of what happened to someone he cared deeply about. That song began as a sweet line about somebody thinking he picked the pocket of God to have met someone, and I thought, That’s too Hallmark, so I tried to balance it with a Raymond Carver sensibility, where definitions aren’t the same for everyone, where the narrator is untrustworthy. I’m a big fan of Randy Newman, the songwriter king of untrustworthy narrators. And this song is an exception on the album in that I didn’t try to counteract the dark lyrics with brighter music. I stayed there, I painted an open void, then kept the music staring right there with me. The string arrangement helps with that – put the headphones on to hear the ear candy in those layered strings from Matt Combs! (Combs is the staff fiddler and mandolinist for The Grand Ole Opry.) And that’s Spencer Cullum (Steelism) on steel guitar holding drone notes through the whole thing, and he’s also on ‘O Charlene,’ ‘Room 101’, and he plays lap steel on ‘When In Rome.’”Cory approaches songwriting with a combination of self-abnegation and the hyper-critical. “I try to not exist when I’m writing. I write with a magnet, or a divining rod. Then when I’m editing I go in with a scalpel. I try not to look for certainties, I try not to get dogmatic, and all my hope is qualified, highly qualified.”

To parse his emotions, Cory stirs himself with motion. “When I write I usually don’t sit down. Plus I’m on the road a lot, 130, 140 shows a year. But I didn’t write on the road until recently when I learned to get up in the morning and free associate. I look around the motel room, see what it reminds me of, and if I do that before I start driving, then I’ve opened myself up to write in the car. A lot of this record revolves around motion and stasis—should I stay or should I go?”

Though many of the songs are about love predicaments, Cory steers strongly away from the autobiographical – despite a recent divorce. “‘Folks want to treat singer-songwriters as diaries but I’m not really into the self-mythologizing. I don’t write confessional stuff. I don’t find much inspiration in myself. We aren’t the bickering couple on ‘One Happy New Year,’ she isn’t the quasi-alcoholic mess in the venomous ‘When I Leave Here.’ I don’t think there’s any chance of folks mistaking me and her for the murdering drug dealer and thieving prostitute in ‘Pocket of God,’ – but there are plenty other songs they can misread into.”

The autobiographical elements that slip through deal with the mental health of his characters, “Room 101” and “Angels in the Details” in particular. “I’ve been recently diagnosed as manic-depressive, and I had to figure out how to talk about that. ‘Room 101’ is me trying to get a little more verbal about it. There’s a nosedive, but I pull out of it.” In terms of biography, “’That Look I Lost’ is the only relationship song that’s autobiographical, and ‘Son of Mine’ has some of me in it.”

“When In Rome” was written far from where Memphis meets Mississippi, where the rural sensibility meets the urban aesthetic, where Cory was raised. But he felt the pull, and also the aura of a great American songwriter. “I wrote ‘When In Rome’ while driving through Jersey. It came out of one drive. Sometimes the songs are little pieces that linger around and I’ll Frankenstein them together, but a lot of these came out like deer, already standing up.” He laughs. “And I did pick loaded cities to reference. You can’t be more loaded than Memphis and Asbury Park. It reminded me of Guy Clark equating the Mona Lisa, Michelangelo’s David and Doc Watson.” For the sound, “It was so hard to stay away from Springsteen’s E Street Band sound when we were doing that song. But Eric Slick, the drummer, made it work. He’s in Dr. Dog. I wanted a drummer who didn’t come from roots music. Eric was versatile and fantastic. He attacked this one like Keith Moon from the Who.”

Cory assembled the band with an ear toward the 1980s radio and MTV he was raised on. “If you look at the pop charts from ‘79 to ‘85, you can’t find two bands that sound the same.” That’s why When I Go I Ghost sounds like the spin of an old radio dial in a brand new car. “I find that over-qualified and under-prepared can create lightning in the bottle.” In addition to his expected vocal, guitar and songwriting talents, Cory now adds synth playing, something he learned during the pandemic.

The core band, in addition to drummer Eric Slick, is bassist Robbie Crowell (Deer Tick, Midland), who also played on Cory’s previous album Adios; Jarrad K, who produced Ruston Kelly and can play anything, and here is on various keys and synthesizer; and the in-demand Anthony da Costa on guitars and vocal harmonies. The album was recorded mostly in Nashville at Battle Tapes with producer and Grammy-winning engineer Jeremy Ferguson. “We went back to Memphis for the horns – don’t nobody want no Nashville horns.”

Other guests include Jason Isbell who contributes the Orwellian guitar solo to “Room 101” and is part of the “When I Leave” Nazareth-sounding guitar mountain. He also sings on three tracks. “I love Jason’s singing – I’d let him be the voice of my GPS!” Brian Fallon (The Gaslight Anthem) sings on two, including in a round with Jason and Cory on “When in Rome.”

Garrison Starr duets on “Waterfront.” “You can’t run into a guitar center and buy Garrison Starr’s voice. You need her. It’s a one of a kind instrument. She said, ‘You want me to sing harmony?’ I said, ‘No we’re swapping lines like Dolly Parton and Kenny Rogers in ‘Islands in the Stream.’” Adam Lazzara (Taking Back Sunday) sings on “Honey Come Home.”

The music of Cory Branan is like a magazine anthology that rivets you; you’re always thrilled to get to the next story because it will be different, unexpected, and galvanic. “Why limit myself to a certain genre? My style is limited by liking to tell stories. But whatever the song wants to wear is fine with me. Over the years, if I had done one thing, I’d have more than a modest career now. But if I had to stand there and play acoustic singer songwriter music all the time, I’d be bored out of my mind. I love all these different styles and sounds, I’m restless like that.”