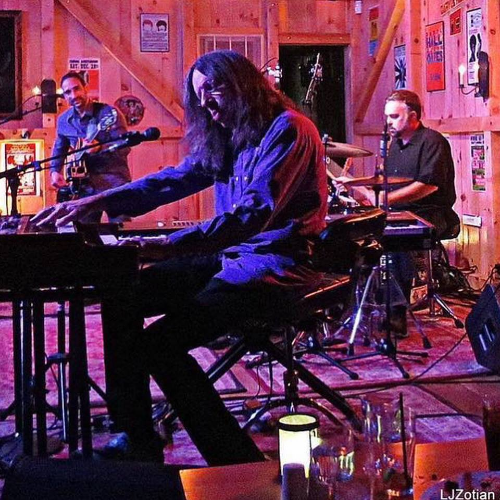 "This man is as good as it gets. One of the greatest keyboard artists I’ve ever heard." JOHN HAMMOND

"One of the most respected keyboardists on the blues circuit." Wade Tatangelo, HERALD-TRIBUNE

Bruce Katz, Bruce Katz is a legendary keyboardist (Hammond B3 and piano) who has released 10 CDs as a leader and has appeared on over 70 other CDs with the likes of John Hammond, Delbert McClinton, Ronnie Earl, Butch Trucks, Duke Robillard, Little Milton, Joe Louis Walker, David “Fathead” Newman, and many, many others.

He has also had a strong musical connection with the Allman Brothers Band, having been a member of Gregg Allman’s band for six years (2007-2013), Jaimoe’s Jasssz Band (2010-2015), Butch Trucks’ Freight Train Band (2015-2017) and Les Brers. Bruce also occasionally toured with the Allman Brothers as well. Jaimoe is a special guest on the new release, playing on several tunes

His new CD, “Get Your Groove!” (American Showplace Music) has just been released and features many new original tunes, both vocal and instrumental. It continues the evolution of the band’s music from the traditional Blues and “Soul-Jazz” it is already known for into the improvisational “jam blues” and roots music he has explored as a member of the various Allman Brothers “family bands.”

The Bruce Katz Band is an original, very exciting group of musicians that features an accessible, soulful approach to the blues and jam traditions. The band features his virtuosic Hammond B3 and piano play-ing as well as Chris Vitarello’s brilliant guitar playing and vocals. Based in Woodstock, NY, the band tours and performs at venues and festivals throughout the U.S. and Europe.

"He can play jazz, blues, Bach, anything. Man, he’s a heavy!" GREGG ALLMAN

"The Bruce Katz Band’s music has the air of unflagging tradition yet it blurs the lines between genres. It is of itself and beyond itself at the same time. It’s like Mozart with a jazz trio playing at Junior’s Juke Joint on a Thursday night." BLUES BISCUITS

"Bruce Katz and his men gave those present a concert they’ll remember a long time. Vitarello is an outstanding guitarist, with an astonishing technique and a broad creative range." ROOTSTIME