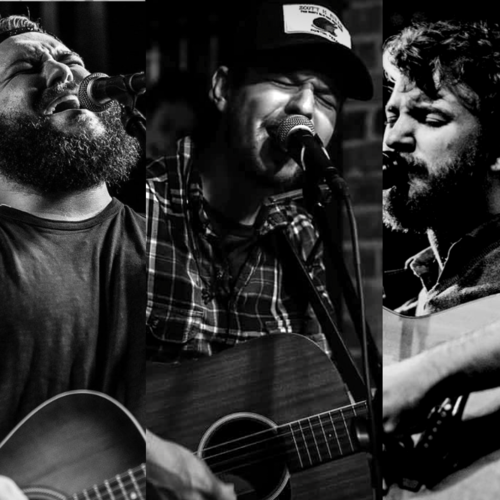 Jordan's music has been described on Clever Loafing Tampa Bay as "a special brand of Americana for admirers of bands like American Aquarium, Lucero and Ryan Bingham."

Jordan's debut album, Give to Get a Day, was released on all music streaming services and on CD on April 27, 2018. The album includes originals like See You Letter and Clouds. The record features local musicians Tanner Johnson, Zack Maruniak, Rhemy Ventura and Sara Underhill, and it was recorded at TSM Studio in Longwood, Fl.

Kyle Keller is that kind of folk artist that is actually worthy of the name. He is a communicator, a story teller, and a prophet of sorts. He approaches songs in the same way as every good folk and blues singer of old, with a message. I have had the joy of following Kyle over the last few years, and I have seen him blossom into one of the finest young lyricists that I know. I travel to songwriter events all over this country, and to find a poet of his caliber is rare... not to mention a poet of his age. Kyle has a voice that reminds me of the great Townes Van Zandt... not in its tone, but in the way that it fits his material. Kyle has developed a style around his voice. That is not easy to do. His writing is reminiscent of John Moreland’s, but with the heart of Dylan. It is emotional, and confrontational. It speaks to today. It is current. It is important. He is like a modern Guthrie, and it would behoove you to acquaint yourself with his art.

Florida-based artist, Matthew Fowler, is the perfect storm of all the essential singer-songwriter elements: a flawlessly raw yet organic voice, intricate melodies, compelling musicianship, and an overwhelmingly rich and rootsy sound. He released his homegrown debut album, “Beginning”, comprising of songs written between the ages 14 and 19 years old. The record, which was recorded live in his kitchen back home in Orlando, was first singled out by American Songwriter Magazine who hailed: “Fowler shows the same mastery of earnest, strummy, songcraft as established artists like Damien Rice and Ben Howard.”

Since the album’s release, Fowler’s musicianship has been lauded by notable publications such as The Bluegrass Situation, CMT Edge, Acoustic Guitar Magazine, and Huffington Post.

Having started performing shortly after picking up a guitar for the first time, Fowler's stage dynamic has formed into a capturing experience - Opening for acts like Richard Thompson, Damien Jurado, Sea Wolf and Angel Olsen, along with live performances on various NPR affiliates, led Fowler to be hand picked by Sean Rowe (ANTI-records) as his opening act for a spring tour across the Midwest and Northeast.

PBS’ nationally syndicated "Music City Roots” applauded Fowler’s songwriting stating, “He shows poise and command way beyond his years. He delivered his lines over muted, minimal acoustic guitar and then answered those words with explosive chordal bursts, like punctuation”.

Matthew’s fervor for performing live will see him back out on the road with Tana and Adeline Prado, sisters who recorded on his first record, and provide lulling vocal harmonies, tasteful woodwind sections, and piano accompaniment. Fowler continues honing the tunes for his second album, and testing out new material on audiences across the country.