The Jacksonville Zoo and Gardens

The Jacksonville Zoo and Gardens 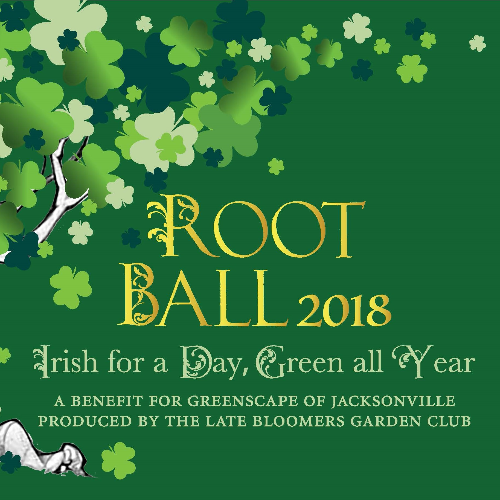 The Root Ball is a benefit for Greenscape of Jacksonville, produced by The Late Bloomers Garden Club.

For the first time in seven years, Greenscape of Jacksonville is pulling up the roots of its largest fundraiser of the year and returning to The Jacksonville Zoo and Gardens for the annual Rootball.

Held on Saturday, March 17, 2018, the Root Ball, produced by the Late Bloomers Garden Club, has as its theme “Irish For A Day, Green All Year.”

According to Anna Dooley, executive director of Greenscape, the organization made the change in venue for several reasons. “We think the Jacksonville Zoo and Gardens is the perfect backdrop for promoting our mission of planting, protecting and promoting trees,” she says. “And we’ve also been told that in addition to the wonderful exotic animals living at the zoo, several leprechauns are rumored to live there too. There may even be a pot of gold.”

Tying the event in with St. Patrick’s Day will add another level of fun, Dooley says. Irish musician/songwriter (and Jacksonville transplant) Brendan Doherty, will perform traditional Irish songs as well as original songs from his last album, “Feels Like Home,” which Irish Music Magazine’s Seán Laffey said, “If you need a label to describe his style, think John Denver at his very best.” Doherty will be accompanied on fiddle by Philip Pan, former concertmaster for the Jacksonville Symphony and member of Canary in a Coalmine. Pan currently performs with folk/rock band Folk is People and Mariachi Primera Costa.

Tickets are $130 per person and are available through 904tix.com. Attire is “green casual.”

A portion of the funds raised at the event will be used to purchase and replant trees throughout the city that were damaged and destroyed as a result of Hurricane Irma last year.