To-Go and A Show: Taqueria Cinco and Coco

To-Go and A Show: Taqueria Cinco and Coco 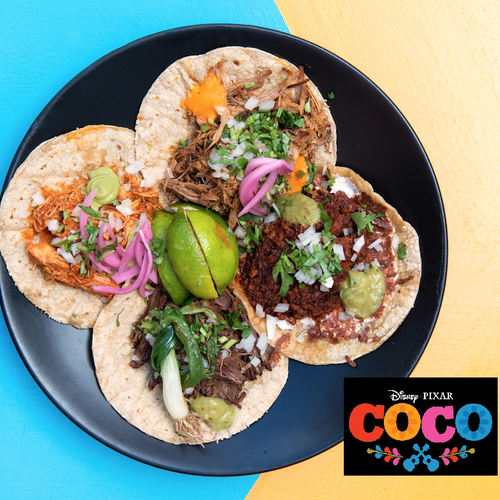 Have you missed Jacksonville Magazine's Secret Supper Clubs? Well, we've missed hosting them. With a little work here and a lot of brainstorming there we have a new concept for our guests to enjoy local favorites while remaining safe in their own homes.

To-Go and A Show!

We partner with local restaurants to bring you a delicious meal (yes, you guessed it, it's a secret!) that you can enjoy in your own home. The twist? It's themed to a popular film! It's simple. Simply order your meal (buy a ticket above), pick up the mystery dinner on the designated date and time frame and head home and watch your film.

Our next stop in the series is with Taqueria Cinco who has themed their dinner around Disney's Coco. Guests can expect four courses featuring tasty bites of empanadas, tamales... but we can't give too much away! Pick up is Friday, October 30, between 5-6:30 PM.

Coco is a 2017 American 3D computer-animated fantasy film produced by Pixar Animation Studios and released by Walt Disney Pictures. The story follows a 12-year-old boy named Miguel who is accidentally transported to the Land of the Dead, where he seeks the help of his deceased musician great-great-grandfather to return him to his family among the living and to reverse his family's ban on music.

The film was praised for its animation, voice acting, music, emotional story, and respect for Mexican culture. It grossed over $807 million worldwide, becoming the 16th highest-grossing animated film ever at the time of its release. Recipient of several accolades, Coco was chosen by the National Board of Review as the Best Animated Film of 2017. The film won two Academy Awards for Best Animated Feature and Best Original Song ("Remember Me"). It also won Best Animated Film at the BAFTA Awards, Golden Globe Awards, Critic's Choice Movie Awards, and Annie Awards.

You can currently watch the film on YouTube, Google Play Movies & TV, Amazon Prime Video and Vudu starting at $2.99. The film can also be streamed with a Disney+ subscription.