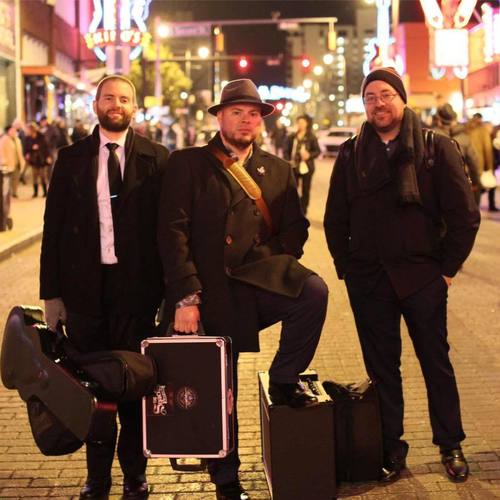 The Snacks Blues Band has steadily grown a reputation for their wide variety of original music, stylized cover songs and high energy performances for over 17 years. Based out of Jacksonville, Florida their carefully-crafted sound preserves the deepest-rooted blues traditions established by pioneer artists such as: Muddy Waters, Howlin Wolf, John Lee Hooker and Robert Johnson; while infusing the upbeat rhythms of the Soul, Rock, R&B and Funk movements that historically followed. The Snacks Blues Band features the powerful, barrel-chested vocals and rhythmic "juke-joint" harmonica stylings of John-Michael Brown; the warm, clean, lead tones and delta-like fingerpicking of Brian Boos on guitar; and are expertly backed by the versatile percussion of "Mad" Matt Schaeffer.​Childhood friends, Brian and John-Michael, formed the original iteration of The Snacks after John-Michael returned from his first Army combat-tour of Iraq in 2003. The two debuted as a Blues Duo and continued to perform locally for a number of years. In the Spring of 2012, after many successes as a duo, another childhood friend, Matt Schaeffer, was added, and The Snacks continued on as a trio.

In 2013, they independently released their first album, "Whiskey Won't Make You Forget" and took first place in the St. Johns River Blues Festival. Since then, The Snacks have continued writing original music and honing their craft while performing multiple times per week. In 2018, they participated in the Regional Blues Challenge, hosted by the First Coast Blues Society, and were selected to represent Northeast Florida at the 35th Annual International Blues Challenge in Memphis, TN. Out of 104 acts from around the world, they made the final 38, reaching the semi-finals of the competition.

Currently, The Snacks are hard at work writing, rehearsing and preparing for the release of their new album entitled "Return of The Snacks".