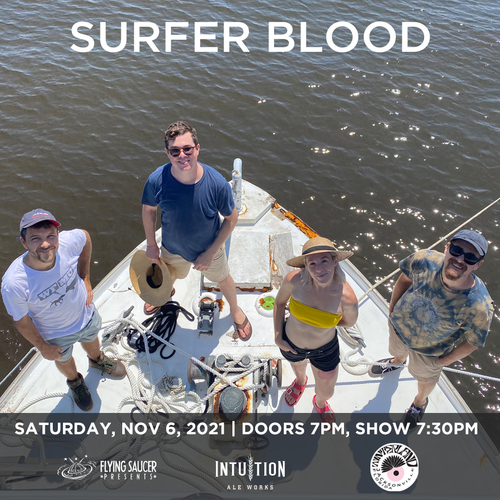 Surfer Blood's 5th album came out in 2020, alongside a 10th anniversary reissue of their debut album Astro Coast. Surfer Blood's music is renowned for catchy hooks and sonic detail. One of the best indie guitar bands around, founding members John Paul Pitts and Tyler Schwarz are joined by guitarist Michael McCleary and bassist Lindsey Mills, all four alumni of the same high school in West Palm Beach, Florida. Surfer Blood are the cleanest and nicest band in existence.

Las Nubes means “the clouds” in Spanish and the band lives up to that name with a spacy, but also beachy vibe with lyrics that switch between Spanish and in English. (Tom Tom Mag)

Timothy Eerie It’s no accident that the name Timothy Eerie is so close to Timothy Leary , this is the aural equivalent of two tabs and a trip down the rabbit hole. This day-glo rock 'n' roller has been kicking around the underground since his first release in 2017 and has made quite a name for himself in a short period of time. Like many of the bands of this genre there has been a revolving door of players, but that only lends to the mystique of Timothy Eerie’s sound. A sound which started as a bedroom recording project that has clearly moved beyond the bedroom.

SeaGate Though the group’s name may reference a Neptune Beach thoroughfare, SeaGate’s sound could easily have emanated from Manchester, UK circa 1982. (Void Magazine)