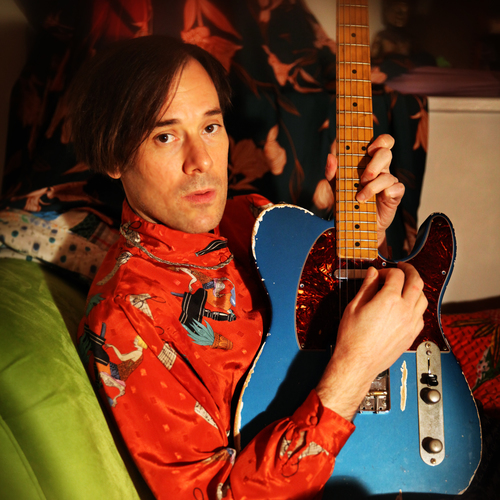 Kevin and Christina make out in a car at the airport, flipping off the police officer that tells them to keep moving. Kevin and Christina discuss taking ecstasy as couple’s therapy. Kevin and Christina break down and then reconnect. The new love we heard about on the last of Montreal record, White is Relic/Irrealis Mood, is settling. If that was the falling-in-love record, then this is the staying-in-love record. That was the easy part; this is the interesting part, the challenging part, the next chapter of Kevin Barnes’ autobiographical album streak, UR FUN.

The public diary that started with of Montreal’s classic album Hissing Fauna, Are You The Destroyer? has continued into a growing string of increasingly personal works. On UR FUN, Barnes is more candid than ever, presenting ten concise electro-pop songs that expose the depths of their current life, their private thoughts—both optimistic and brooding—and their passionate relationship with songwriter Christina Schneider of Locate S,1. This ramped-up vulnerability has inspired Barnes to strip their stage persona of costumes and drag, just appearing as themself on recent tours for the first time in many years.

After several albums recorded with collaborators and various band members, Barnes opted to record this one completely alone. In their home studio in Athens, Georgia, Barnes isolated themself in creative hibernation, working obsessive 12-plus hour days arranging manic synth and drum machine maps on a computer screen with bouncy, melodic basslines, glam guitars and layered vocal harmonies. Inspired by albums like Cyndi Lauper’s She’s So Unusual and Janet Jackson’s Control, Barnes set out to make UR FUN into the kind of album where every song could be a single, complete with huge hooky choruses and nostalgic dance grooves. The result is an unstoppably fun album that could also pass for a carefully sequenced greatest-hits collection if taken out of context.

UR FUN contains a fundamental contradiction that will be familiar to of Montreal fans. The songs have a youthful, contemporary dance-pop feel, but contain dense, multidimensional, adult lyrics. The album’s opener and first single, “Peace To All Freaks” is a “protest song against totalitarianism, familial terrorism and wastefulness in all its forms” (says Barnes) that expresses love to the outcasts and the gentle people in this world, leaving us with this reminder: “Hush, hush/ Don’t let’s be cynical/ don’t let’s be bitter/ If you feel like you can’t do it for yourself then do it for us”. On “Polyaneurism”, Barnes playfully meditates on the ups and downs of polyamory and unconventional relationships: “Playing musical lovers is starting to feel kind of kitsch/ if you want monogamy are you just like some basic bitch?” According to Barnes, the song “Get God’s Attention by Being an Atheist” is about “the pleasures of childlike destruction and reckless joy seeking.”

UR FUN’s final moments bring the self-examination of the record full circle with some darker numbers that lament a lost friendship and slips of mental clarity. If the album’s bleak ending leaves you feeling hopeless, flip the record over again and remind yourself “Hush, hush, don’t let’s be negative.” This is all for fun after all.

Locate S,1 After a particularly rough solo performance in 2018 when one of her own friends talked loudly throughout her set, Christina Schneider exited the venue and told herself, “If they’re not even going to listen, then I’m fucking done.” It wasn’t quite the feeling she’d hoped for after dedicating her life to creating subversive, genre-fluid pop music. Working under various aliases since 2014 — including CE Schneider Topical, Jepeto Solutions, Christina Schneider’s Genius Grant and now Locate S,1 — she’s explored everything from groovy garage rock to minimalist bedroom pop to Syd Barrett-style psychedelia.

But when she got home that night Schneider gave herself a little pep talk, and after some self-reflection she came away determined to begin another chapter. “I thought, I don’t really need this world to value me,” Schneider says. “The process of writing and playing is what I really love, I’m simply getting lost in this other thing that’s ruining it for me.” Buoyed by her desire to create the same “crazy, powerful feeling” she gets when she hears an ABBA or Kate Bush song, she reached again for the outer limits of pop music and recorded Personalia, her sophomore album as Locate S,1.

Named after a poem by Mary Ruefle, “Personalia,” the lead single and title track, is a retelling of that emotional night in 2018 when she nearly quit. “Almost killed myself so I went home / I just cannot take these local shows,” she sings over a gloomy, despondent bass line. “Drive through thunderlight all alone just to play while they’re looking at their phones / curse another crowd that doesn’t get it,” she later sneers. But in-between this melancholy Schneider suddenly finds her spark. “Plug in tonight when I get to my room / pretend I’m someone that I could believe in,” she sings during the songs fizzy, euphoric chorus. “I’ve shorted out but if I play long enough I'll become the person that I wanna be again,” she cries, echoing some of Blondie’s most triumphant moments.

The song signals Schneider’s desire to center Personalia in the present. Much like the character in Mary Ruefle’s poem, Schneider spends much of the album trying to understand and expel a darkness that has come over her (and society at large) in order to live a more fulfilling life. While she was writing and recording the album in her home studio in Athens, GA over the past year, she was thinking a lot about her own growth and self-worth as an artist, and where her constantly evolving and always experimental music fits in the digital age. Environmentalism, money, power, and modern feminism formed part of that conversation, too. Throughout Personalia Schneider seeks to address how the attention economy is plaguing us with feelings of FOMO and anxiety, and is causing many of us to abandon their progressive values.

One of the more profound statements about this topic comes via a song called “After The Final Rose,” which is based on Schneider’s observations of the final two seasons of the reality TV series The Bachelor and The Bachelorette. “At the end of the season they have this episode called “After The Final Rose,” and the Bachelor or Bachelorette meets up with all the other contestants and they yell at each other,” Schneider explains. “I thought that was a very funny and unintentionally self-reflexive title for the episode, so I borrowed it to criticize corporate feminism and its lethal effects on romance. On The Bachelorette women feel like they’re powerful because they have money and can travel all over the world. It seems like that’s replaced any kind of meaningful feminism or romance in the world, currently.”

Her partner Kevin Barnes, of the rock band of Montreal, co-produced and engineered the album, and shares a writing credit on “Even the Good Boys Are Bad,” which references a conversation she had with Barnes about his daughter beginning to date. Schneider coined the phrase “even the good boys are bad” in reference to his paternal anxiety, they then took it and it turned into the album’s biggest hook—“Even the good boys are bad / even the best ones, even the good sons.” The song reached its final form after Schneider listened obsessively to Britney Spears’ hit single “Toxic.” You can hear this influence in the charging drums, spiraling synths and the song’s enigmatic chorus.

Schneider also has a sharp sense of humor, and while it’s more obvious on stage, if you listen closely you can also hear it on Personalia. Opening track “Sanctimitus Detrimitus” is named after a phrase she misheard while watching the James Stewart movie “Made for Each Other”. “I love songs where people completely make up words, like Steve Miller’s ‘pompatus of love’ but I thought it would be even funnier if I just made up some Latin, though ‘Sancitmitus Detrimitus’ does mean something to me now” Schneider says of the devotional, MIDI-saturated jam. “Futureless Hives of Bel Air” is an apocalyptic, anti-capitalist song about how we are killing our ecosystem, yet something about the idea of the ultra rich leaving behind their empty mansions and fleeing Earth to live in space (the idea came to Schneider in a dream) seems decidedly absurd.

At its core, Personalia is about rebuilding, not rebranding. It’s about evolving and moving forward despite knowing the world is falling apart around you. On the peppy, dance hit “Whisper 2000” Schneider fully embraces this idea: “If you cannot behold my miracle, step away from the vehicle,” she sings with a defiant spring in step.