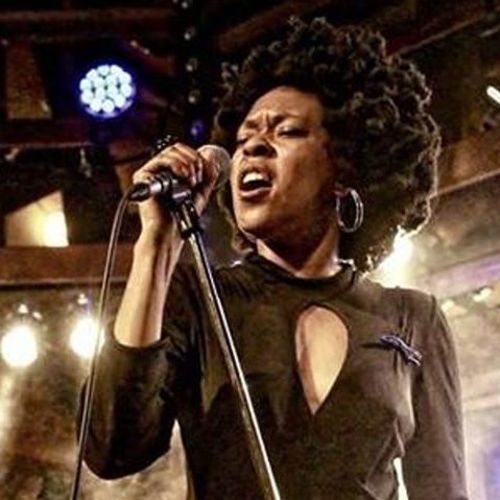 Raised in the church choir and steeped in R&B and garage rock rumble, Nikki Hill is a spitfire with the soul-drenched voice of Etta James and the tattooed, beehived-hair aura of Cramps' guitarist Poison Ivy. 'Heavy Hearts, Hard Fists' is a showcase for Nikki's unfettered versatility, whether it's the debauched bluster of "Struttin'", the Stonesy barn-burning blues of "(Let Me Tell You 'Bout) LUV", or the touching soul ballad "Nothin' With You".

The response has been ecstatic, and now the band tours the globe relentlessly, stunning audiences with their muscular sound, Matt's volcanic leads, and, of course, Nikki's inimitable charisma.

"If Tina Turner and Little Richard had a daughter and raised her with the help of uncles James Brown and Chuck Berry, she'd be like Nikki Hill." -- Minneapolis Star Tribune

"Hill is a petite powerhouse, with a booming voice that is as sweet and luscious as it is gritty and raw." -- Portland Monthly

"Channels such rhythm and blues greats as LaVern Baker, Etta James and Ruth Brown--with a little Sam Cooke and Solomon Burke thrown in for good measure. Hill is the real deal...steeped in gospel and soul, wrapped up in a punk rock DIY ethic." -- Time Out Los Angeles

"A rich, sultry voice...weaned on the church choir and burnished by an enthusiast's love of good music." -- Indy Week

"The newest roots singer is hurtling through the entertainment stratosphere as we speak, and all systems indicate she isn’t heading back to earth anytime soon. Already folks are running around thinking Nikki Hill is out of this world."

"If vocal gifts can get you to the top, a powerful stage presence can keep you there. And Hill has plenty of charisma...."

"With her stylish, quasi-retro look, 27-year-old Nikki Hill can make you think it’s a hothouse Saturday night in 1954 one minute. Then, with the wave of a finger, it’s no less than the very moment at hand. The sound accompanying that look is an earthy, uplifting foraging through an array of styles — rockabilly shouts, Southern blues, Sunday morning gospel, rebel punk and pretty much anything with roots. Deep roots." - The Bloomington Pantagraph

"Nikki Hill molds herself in own image"

"Just try to keep up with her"

"If there has been a better original blues bopper released this year than "I Got A Man", I haven't heard it yet. Great vocal delivery against some ace lead guitar work."