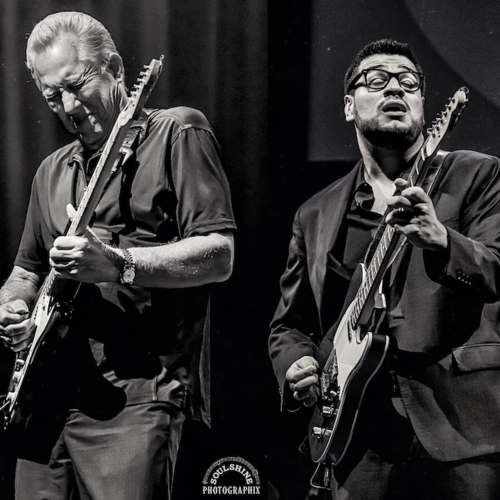 Anson Funderburgh has been an unstoppable force on the national blues circuit since his debut album with his Rockets, Talk To You By Hand, launched the New Orleans-based Black Top label in 1981.

Born in Plano, Texas, Anson grew up in a music-friendly environment; Dallas, with all its bedrock blues and country roots sits 20 miles south. “I’ve always loved music,” he says. “Nobody really played an instrument in my family, but they loved to listen to music.” On Saturdays, the popular country music programs of the day started in the early evening – Panther Hall, The Wilburn Brothers Show, The Buck Owens Ranch, The Porter Wagoner Show, The Grand Old Opry. “I loved to watch all those things,” says Anson. “My dad did too.”

When he was eight or nine years old, Funderburgh received his first guitar as well as an unexpected bonus gift that proved to be highly influential. His mother worked at a local school and she bought it from a lady that she worked with. “I can’t remember how much she paid for it,” recalls Anson. “I still have the guitar.”

A box of 45s accompanied the guitar – Jimmy Reed singles, Albert Collins’ Sno Cone (Parts I and II,) Freddie King’s Hideaway, Wilbert Harrison’s Kansas City and Linda Lu by Ray Sharpe. That precious stack of hard-driving platters pointed Funderburgh in a stylistic direction that proved irresistible. Another important in-the-flesh influence included the Nightcaps, a Dallas-based band whose rollicking Wine, Wine, Wine was a regional sensation during the early ‘60s. “I think they probably inspired all the guitar players in my area,” says Anson.

Then there was his in-person brush with B.B. King, which left an indelible impression. It was 1969 at the Loser’s Club off Mockingbird Lane in Dallas. “It was a small club and he had the entire band, horns and all. It was amazing. It just blew me away.”

Anson became a professional musician at age 15, playing in a variety of local bands including Sound Cloud Reunion and the Bee’s Knees. “Because of a dance that was popular called the Texas Push, we always played shuffles,” notes Anson. “You had to do a bit of different styles of music for different things. Honestly, it was mostly blues. That’s the truth.”

Along the way, he listened to the greats of the genre, absorbing all he could. His biggest influences stylistically were Freddie King and B.B. King but Funderburgh also embraced the West Side sounds of Buddy Guy, Otis Rush and Magic Sam. “I like all the guys that played behind the harmonicas, too – Luther Tucker and Robert Jr. Lockwood, Louis and David Meyers. I love all those old Jimmy Reed things with Eddie Taylor. There’s just so many.” Jazz greats Kenny Burrell and Barney Kessel also had an impact.

Anson’s first big break came in 1978 when he teamed up with harmonica player and vocalist Darrell Nulisch to form the initial incarnation of The Rockets. Introduced through a mutual friend, they started gigging every Monday night together in October of that year and by January of 1979 they were making music together full-time at Poor David’s Pub in Dallas. “It was such a fun thing, and we enjoyed the same kind of music, so it just kind of stuck.”

Anson Funderburgh & The Rockets were the inaugural artists on Hammond and Nauman Scott’s New Orleans-based Black Top Records, one of the leading contemporary blues labels throughout the 1980s and ‘90s. Kicking off the label in 1981 with their acclaimed debut release, Talk To You By Hand, the band encored in 1983 with She Knocks Me Out!. “Those records with Darrell, I think those were good records,” says Anson. “We did a lot of covers at that particular point.”

Funderburgh found Nulisch’s successor by pure happenstance while the Rockets were out on tour and playing in Jackson, Mississippi. Sam Myers already boasted quite a resume, having cut classic singles for the Ace and Fury labels more than two decades prior. While playing at a club called George Street Grocery in ’81 or ’82, Myers came and sat in with the band. “Every time we played Jackson, we’d go see Sam…...we just became real good friends,” recalls Anson.

In 1984, Sam and Anson recorded My Love Is Here To Stay for Black Top. “I just had an idea of putting together a record, a little side project I could do, and still do The Rockets. And it would be a way to help Sam…….it sounded so good to me, that record is a great record.”

Nulisch stepped away from the music business and exited The Rockets in 1986. “When Darrell decided to leave the band, I called up Sam and asked him if he wanted to move to Dallas. He said, ‘Sure.’ I went and picked him up in Jackson and moved him to Dallas,” recalls Anson.

With Myers as The Rockets dynamic front man – his booming pipes were perfectly complemented by his muscular harp work – Anson embarked on his most bountiful period on wax, issuing one spectacular album after another on the Black Top imprint:  Sins (1987), Rack ‘Em Up (1990), Tell Me What I Want To Hear (1991), Live At The Grand Emporium (1995) and That’s What They Want (1997). And you can throw in the ’91 overview Thru The Years: A Retrospective for good measure. Anson also guested on Black Top recordings by Snooks Eaglin, Nappy Brown, Joe Hughes, Grady Gaines and James “Thunderbird” Davis. The band moved to Bullseye Blues in 1999 for Change In My Pocket and Which Way is Texas? in 2003. The Rockets even achieved cinematic immorality by appearing in the nourish 1994 feature China Moon, starring Ed Harris. The film’s soundtrack also featured several of the band’s songs.

The longstanding musical partnership between Anson and Sam brought both international acclaim. For 20 years The Rockets, along with Myers, toured continuously all over the world and went on to win ten Blues Music Awards from the Blues Foundation in Memphis, Tennessee.

Myers succumbed to cancer in 2006 and his death came as a crushing blow to Anson. “I don’t even know how to explain it, really,” he says. It just seemed like it was kind of time to rest for a minute.” He took a break from non-stop touring but continued to perform periodically as The Rockets with featured guest singers and harmonica players including James Harman, John Nemeth and the late Lee McBee. Washington, DC-based Big Joe Maher also shows up as a special guest, taking over drummer and lead vocalist duties.

Over the years, Anson has caught the attention of some of the most influential musicians in the business. He played on Delbert McClinton’s first Curb Records release I’m With You in 1990 and is a recurring guest on McClinton’s renowned Sandy Beaches cruises. Anson also performed alongside fellow Plano native Boz Scaggs on an episode of David Sanborn’s innovative television series Night Music.

You are just as likely to find Anson behind the board as you will on any festival stage. In addition to producing his own albums, he is the man behind John Nemeth’s release Magic Touch. He has produced all four of Nashville-based guitarist Andy T’s albums (whom he also toured with as special guest) and provided the same service in 2011 for the Ruff Kutt Blues Band’s Milk Block Blues. Funderburgh helmed Jonn Del Toro Richardson’s disc Tengo Blues which garnered the 2017 Blues Music Award for Best New Artist Debut. Most recently, he produced the critically acclaimed Problem Child for Italian blues guitarist Dany Franchi.

Funderburgh undeniably remains best known in the blues field for his extraordinarily concise lead guitar attack. In addition to anchoring his latest iteration of The Rockets, he’s been touring since 2010 with Bay Area-based harmonica player Mark Hummel as a prime factor in the Golden State-Lone Star Revue. Another frequent musical cohort is New Orleans multi-instrumentalist Eric Lindell; they’ve recorded and toured together on a regular basis, including six appearances at the annual New Orleans Jazz & Heritage Festival.

Funderburgh’s unmistakable style, tone and sensibility has made him one of contemporary blues music’s most important guitar players. Once a clean-cut up-and-comer on the national blues scene who’s crisp, biting guitar licks belied his soft-spoken manner, Anson has developed into a legacy artist and his influence on countless guitarists is immeasurable.

At 32 years old, Jose Ramirez is Costa Rica’s premier blues artist and has played with some of the biggest names in the blues industry. These artists include Buddy Guy, Anson Funderburgh, Janiva Magness, Mark Hummel and Bryan Lee, to name a few.

The Jose Ramirez Band recently won second place at The Blues Foundation 2020 International Blues Challenge in Memphis. The band performed in the finals at the Orpheum Theater in Memphis after advancing to the quarter and semi-finals against over 230 bands from around the world.

In the past couple of years, Jose has traveled the world playing the blues. His two European tours included more than 45 concerts in England, Spain, the Netherlands and Belgium. His U.S.A. tour included shows around the Midwest and the South. Highlights included shows at legendary clubs such as Buddy Guy’s Legends and The House of Blues in Chicago.