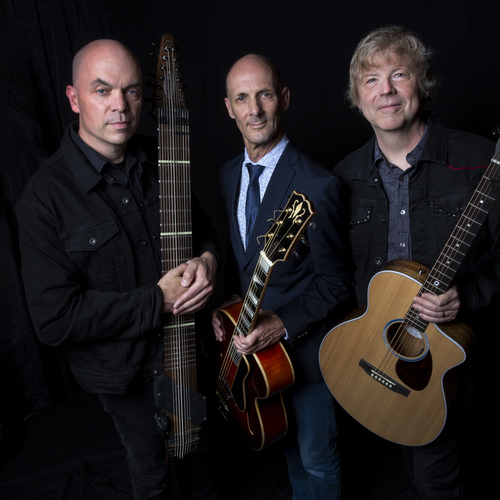 "The three guitar players come together in perfect harmony, just as their backgrounds do."

The CALIFORNIA GUITAR TRIO story begins in England at one of Robert Fripp's Guitar Craft Courses in 1987 when three students, Bert Lams (Belgium), Hideyo Moriya and Paul Richards (USA) meet for the first time. After completing the course, they join ROBERT FRIPP'S LEAGUE OF CRAFTY GUITARISTS trough a long tour. The three young musicians want to keep together and join in 1991 in the city of Los Angeles to form THE CALIFORNIA GUITAR TRIO. Their style is absolutely unique and probably only compared with "THE GUITAR TRIO" (John Mc'Laughlin, Al DiMeola and Paco de Lucia). The objective of the band was not only to create complex compositions but also to arrange and recreate classic or Baroque music and even to cover the Californian surf tunes. Along their career they have opened KING CRIMSON concerts and other talented musicians as John Mc'Laughlin, David Sylvian, Tito Puente, The FLOWER KINGS and many more. They sign with the Fripp/Crimson label Discipline Global Mobile, and in 1993 release "The Yamanashi Blues" an incredible debut album that literally covers various genres like pop, classic, surf music and jazz with extreme quality. In 1995 they release "Invitation" an album that includes more original compositions plus incredible covers as "The Good, The Bad and The Ugly (Ennio Morricone for a spaghetti western with the same name) and Bach's essential "Toccata and Fugue in D Minor". After almost three years of tours around the world they release their best selling album "Pathways" which includes compositions by Bach, Beethoven and Stan Funicelli among others, including the notorious "Classical Gas" by Mason Williams. CALIFORNIA GUITAR TRIO has 4 live albums "An Opening Act - On tour with King Crimson" in 1999, "Rocks the West in 2000", Monday Night in San Francisco with Tony Levin in 2000 and "Live at the Key Club" with former King Crimson members Pat Mastelotto and Tony Levin in 2001. After almost ten years with Discipline in 2002 they sign with InsideOut label and release another acclaimed album CG3+2 again with Mastelotto and Levin. In December of the same year "Christmas music" is released, with relative success among the fans. To celebrate the first ten years the band releases a compilation named "The First Decade" with some of their best tracks, one of the few albums of this kind worth to buy. 2004 finds a new release of CGT named "Whitewater" produced by Tony Levin who will be touring with the band, album that I haven't got yet. If you only listen Progressive Rock this band may not fill your expectations, but if you're a person who's ready to listen great instrumental music despite the genre, CALIFORNIA GUITAR TRIO is your band.