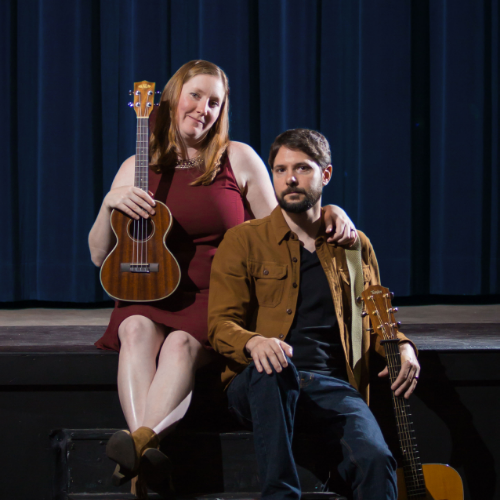 Mark Mandeville and Raianne Richards are clearly inheritors of a timeless legacy, creating music that is both original and evocative of a rich tradition. Blending distinctive voices and a wide range of accompaniment (guitar, harmonica, ukulele, clarinet, penny whistle, electric bass), their songs have been well-received by audiences around the eastern United States and Canada since 2010. Transcending the genre of folk Americana, their music echoes inspiration from traditional folk duos and singer/songwriters like Ian & Sylvia, Kate Wolf and Neil Young – combining beautiful harmonies and a lyrical intensity, while establishing a unique sound of their own. - Nick Noble, WICN (Worcester MA)

Both artists are products of central Massachusetts mill and factory towns, and for all their national exposure, they are passionately dedicated to the region and what it has to offer. Each summer for the past decade they have organized the “Massachusetts Walking Tour” where they hike the roads and trails of the Commonwealth, more than 100 miles in less than two weeks, in support of the arts in local communities along the way. Each evening they stop over in yet another Massachusetts town, putting on a free concert there, along with local performers and fellow artists who accompany them on their journey. These annual two-week treks also raise awareness of the trails and greenways in Massachusetts, using music to make important connections.

“The best part of their performance is the undeniable chemistry Mark and Raianne have together; they play with a comfortability and trust that can only come with years of partnership. They allow enough space in their musical bond to for us to settle in and witness some serious songwriting and playing.”

“In recent decades country music has become more and more fragmented, which has produced many interesting new singers/bands, and a few we would rather forget. Mark Mandeville and Raianne Richards are two we should remember.”