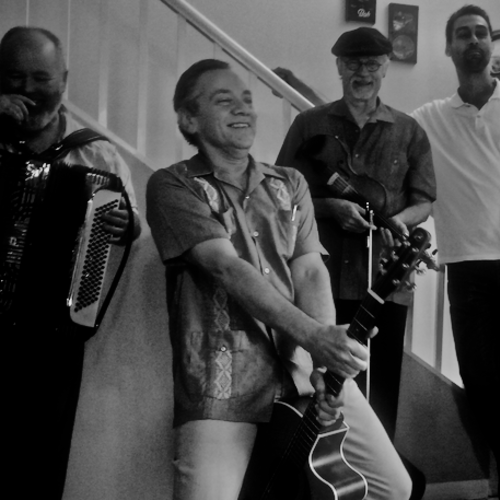 SWING BOUTIQUE is a group of Central Florida musicians, led by guitarist and vocalist George Grosman (www.georgegrosman.com) and including John Keith on accordion, Bo Frazer on fiddle and Nick Rosaci on bass. The band’s focus is a genre of music best defined as “French Jazz”. The repertoire contains music by Django Reinhardt, Edith Piaf, Gilbert Becaud, Dean Martin and others, as well as some original music. This is jazz but with a distinct European flair, or as the French would say a “je n’est sais quoi” The band’s website is swingboutique.net

Each musician in the group has a a rich and varied background in performing and recording. George has played, written and produced music on three continents, having been born in Czechoslovakia and lived in Israel, the UK, Iceland and Canada before moving to the U.S. John Keith has played accordion with a variety of zydeco and Tex Mex bands in New Mexico and Baltimore before returning to his native Florida to play roots music with all and sundry. Bo Frazer is a sought after violinist, multi-instrumentalist and teacher based in Melbourne, FL. Nick Rosaci is a seasoned Disney performer on bass and tuba, as well as a published author, having just published a biography of famed Memphis bassist Donald “Duck” Dunn, including rare transcripts.

Past performances include the College Park Jazz Festival, the Foosaner Museum in Melbourne, the Norton Museum in Palm Beach, the Brevard Jazz Society series of concerts, long stints at various dining establishments in Orlando (such as Tibby’s and Belle Isle Bayou), a tour in Savannah, GA in addition to countless private functions. In George’s case the list also includes such prestigious venues as the Toronto Jazz Festival, the National Performance Center in Ottawa, Canada and well known jazz venues in Toronto such as the Rex Hotel and Hugh’s Room where George’s band opened for Jazz Great Larry Coryell