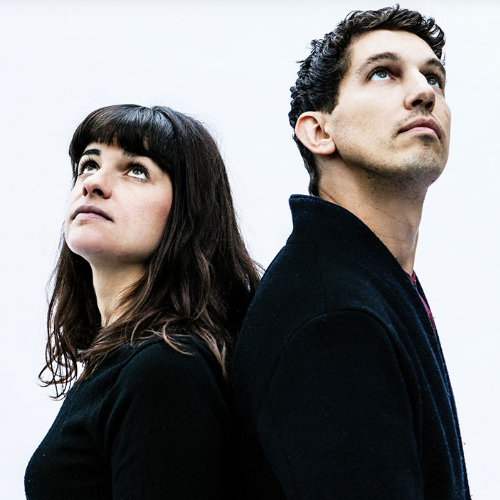 “…a dynamic musical stew that covers a wide spectrum of acoustic-based roots music, hitting on old-time, folk and bluegrass, all delivered with a dash of rock and roll spunk.”
American Songwriter Magazine

“When each song ended, the two pressed tight into their microhphones, savoring the last strains of the harmony – and even the bartenders seemed to be leaning forward breathlessly, awaiting someone to clap first. Their self titled recording aptly demonstrates the power of a spare, tightly-connected acoustic performance that is given room to evolve – for bluegrass fans, the lightning fast harmonic runs on dueling fiddle is worth the price of admission alone. But it’s the off-road experiments, especially from Christian’s biting bow strokes that will make future audiences take note.”
The Bluegrass Situation

“An unassumingly intriguing record…something out of the ordinary”
Steve Hunt, fRoots Magazine (UK)

Two years after releasing Weight of the World, the sophomore recording which earned them attention from NPR: All Songs Considered, a #3 slot on the Billboard Bluegrass Charts, and took them on tour all over the US, UK and Australia, 10 String Symphony felt the desire to expand their acoustic, stripped down sound. Named for their unique instrumentation of two five string fiddles alternated with a five string banjo, 10 String Symphony is the collaboration between GRAMMY nominated fiddle player Christian Sedelmyer (The Jerry Douglas Band), and acclaimed songwriter and multi-instrumentalist Rachel Baiman. Since their inception in 2012, the duo has gained the attention of NPR’s Jewly Hight, who listed them among “The Newest and Best Voices in Americana” for their unique and compelling vocal and string arrangements, which are at once traditionally informed yet completely avant garde. Their new album, “Generation Frustration”, produced by Scotland’s Kris Drever, digs even deeper into the potential for experimentation with stringed instruments while highlighting new depths in the pair’s original songwriting. Unafraid of pushing boundaries, the resulting songs are as challenging as they are beautiful.

It’s been an exciting couple years for Baiman and Sedelmyer, both individually and collaboratively. Having gained a reputation for string arrangements in Nashville, 10 String Symphony’s unique sound has been enlisted for albums by Kelsey Waldon, Caroline Spence, Special Consensus, and Missy Raines, as well for live strings with Kacey Musgraves at the Ryman Auditorium. Their tour schedule has included stops in Hong Kong and Australia as well as opening slots for Sarah Jarosz and Sierra Hull. Sedelmyer spent the better part of 2017 touring with Jerry Douglas and recording on his new album “What If”, which culminated in a GRAMMY nomination for Best Contemporary Instrumental Album this past February. Baiman released a politically charged solo album, “Shame”, which was featured on Noisey and NPR’s “Song’s We Love”, and took her on tour around the country, including a stop at The Kennedy Center’s Millennium Stage, and numerous shows opening for Mandolin Orange. Time spent working together and apart influenced the direction of the duo’s new recording, which reaches new heights of maturity in sound and depth.

Sedelmyer and Baiman were looking to expand the 10 String Symphony sound in an organic and authentic way, to create an extension of their two musical voices, rather than incorporating new instruments or band members. “We really wanted to retain the tight knit, duo sound of the collaboration, but we wanted more options sonically. We wanted to be able to express all the sounds we were hearing in our heads” explains Sedelmyer. For this mission, they sought out the talents of Scotland’s Kris Drever. Drever is one third of experimental folk trio LAU and the 2017 BBC Folk Singer of the year. With LAU, Drever has launched a formidable exploration of acoustic and electronic sounds, combining the rawness of traditional music with lush electronic soundscapes. “LAU has really explored a new frontier for traditional musicians. They have forced people hear ancient music in a hyper-modern context; it’s incredible” says Baiman.

10 String Symphony traveled to Edinburgh, Scotland in April 2017 to work and arrange with Drever, culminating in 10 days recording in Pencaitland’s Castlesound Studios. “We wanted to go directly to the source of the sounds we were seeking out” says Sedelmyer, “to work with Kris in his own musical territory so we could soak it all in”. What emerged was Generation Frustration, a 10 track album of original songs giving voice to the helplessness often felt by the Millennial generation with regards to politics, racism, poverty, privilege and a global climate crisis while living under the leadership of political parties that were largely voted in by majorities from older generations. From the catchy single “Anxious Annie” which embodies the animalistic fear of a country in crisis “I don’t want to worry/I don’t want to cry/ I don’t want to be afraid to die” to the powerful “Others Must Knock”, which is a treatise on privilege “you drive these roads, while others must walk/ and you enter freely where others must knock / another’s misfortune is your afterthought / so for once hold your tongue so that others may talk”, the album searches for meaning at every turn. The political and social division and subsequent collision of generations is exemplified musically through the sound of an acoustic duo layered over modern sounds, a combination of past and present that hits the listener both emotionally and intellectually.

There is hope as well as fear in Generation Frustration. A hope that music is one way to bridge ever more polarized political and social gaps. As the title track explains: “I could write down the facts hard as concrete / scientifically explain the way the heart beats / but I sit here instead with my weapon of choice / the dancing of chords under purposeful voice / for I know it’s not fact but feeling that guides/ decisions we make when it comes to the time/ and I wonder if songs ever reach stubborn minds / can I make you believe we’re on the same side?”.